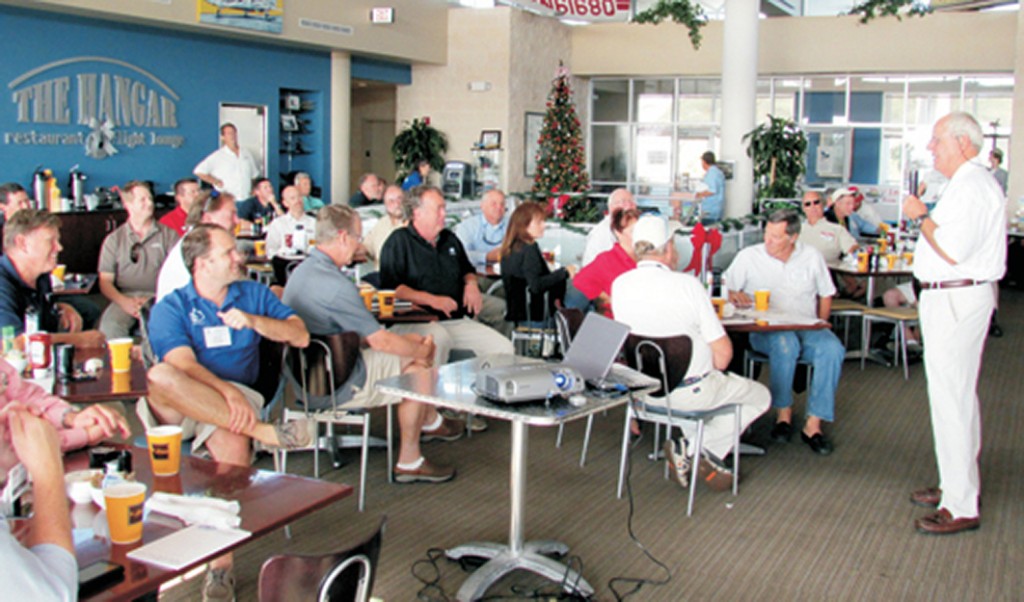 On Friday, December 6th, 2013 the Manasota/Tampa Bay (MTB) Region of the SWFMIA held the first industry breakfast meeting at the Hanger Restaurant. We had great attendance with 92 people representing 62 companies. We also signed up 6 new members. The meeting was opened by the MTB Regional Chairman, Jopie Helsen of the Sailor’s Wharf Yacht Yard. He thanked the sponsors Port Supply-West Marine and Mastry Engine Center who made this meeting not only a success but very affordable for a complete buffet breakfast.

Jopie introduced John Good, the executive director of SWFMIA who talked about the achievements of the Region. John introduced Hans Wilson, the SWFMIA president who gave a MIAF update and talked about his role as a member of Governor Scott’s Boating Advisory Council. Hans introduced Missy Timmins, our state legislative lobbyist who gave a very enthusiastic overview of all that is happening in our state concerning our industry. She also brought to our attention upcoming issues that may affect our industry. We are all very happy to have Missy Timmins on our team.

Next, Norm Schultz, an icon in the marine industry for the past 30 years, was introduced and spoke about all the benefits of belonging to a marine association and that we can’t do it alone. If we work together as a team, we will have more impact to accomplish all our goals to make us all successful. Jopie Helsen talked about the issues that are affecting our industry in the Tampa Bay area including the dredging issues of the passes on Florida’s West Coast and the local channels that have shoaled and will not allow boats to get in our out of their slips based on the tides. He has also been named to the St. Pete Waterfront Task Force to represent our association and has been asked by the Pinellas County Commissioners to give a presentation of our industry on Tuesday, January 28th, 2014.

John Good finished the meeting by talking about our website www.goboatingflorida.com and the improvements that will be made to the site in 2014. He also encouraged those who are not yet a member of our association to join.