Studying the Economic Impacts of Algae Blooms in SWFL

The University of Florida Institute of Food and Agricultural Sciences has released a study quantifying the socio-economic impacts of harmful algal blooms (HAB) in Southwest Florida in 2018. The study was commissioned by the West Coast Inland Navigation District and the Marine Industries Association of Southwest Florida and Tampa Bay. It is believed to be one of the first studies confirming the HAB’s direct impact on a specific segment of Florida’s economy.
The study contains extensive data, but a snapshot shows that the 2018 HAB resulted in a 36% decrease in sales revenue in the marine recreation sector and a 61% decrease in for-hire/charter operations. It further suggests a direct impact of $184 million on visitor spending during the 2017-2019 period.
The study includes Charlotte, Collier, Hillsborough, Lee, Manatee, Monroe, Pinellas, and Sarasota counties. The Southwest Florida region is home to 4.7 million people with a gross state product of nearly $255 billion, $2.8 million full- and part-time jobs, and represents roughly 22% of Florida’s total economy. VISIT FLORIDA estimates that 131.4 million visitors came to Florida in 2019 and that the eight-county region collected an average of 24% of the state’s tourist development taxes. 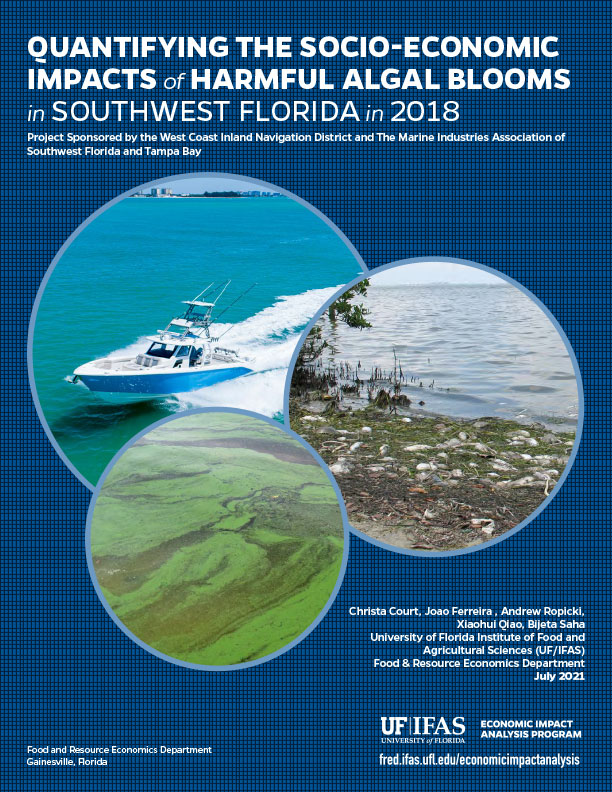