END_OF_DOCUMENT_TOKEN_TO_BE_REPLACED

The U.S. Fish and Wildlife Service has announced plans to downlist the West Indian manatee from endangered to a less-serious status of threatened under the Endangered Species Act.  This is primarily a result of a steady increase in the manatee population in recent years.

It is not anticipated that this would mean any short-term changes in speed zones or other protections currently in place.  In the longer term, it could ease some restrictions on dock permitting and dredging and may lessen the chance for further speed zone restrictions.

The Marine Industries Association of Florida actively supports responsible boating practices and stewardship of all natural resources.  We continue to advocate for sound decisions, based on science, in managing the manatee.  It is our belief that this is a responsible move on the part of the service and indicative of the success of the Endangered Species Act in bringing the manatee population back to sustainable levels.

The Service is now asking for public comment, a key step in the downlisting process.  We encourage every boater, fisherman, and outdoorsman to participate in this process.  Comments from actual waterway users has far more impact than any other single source.

Be respectful, be factual, and point out that you actually live in Florida or make use of Florida waters. Below is a sample response, but please use your own words and personal experience in crafting your reply. The more individual each response is without it looking like a form letter the more likely it will be read and considered.

“Thank you for the opportunity to comment on the proposed down-listing of the manatee from ‘endangered’ to ‘threatened’. As a Florida resident and a boater, I have personally seen the growth of the population, and the expansion of their range. Given this growth over the past decades, “endangered’ status is not applicable. I encourage wildlife managers to develop a long term program to sustain the population in balance with other critical resources important for our estuaries. As with other species, we should study carrying capacity, food resources, and possible threats from an over-abundance of animals in certain locations.  Those efforts cannot be undertaken with a species listed as “endangered’.  This step is long over-due, and I applaud the Service for its action and more importantly it’s success in recovering the manatee.”

Finally, mark your calendar for February 20th. There will be a public forum at the Buena Vista Palace in Orlando.   It is critical that concerned residents attend and testify in person. The meeting runs from 3:00 P.M. to 6:00 P.M.

Fort Myers, FL, Sept. 26, 2014 — Justin McBride was named Member of the Year for The Southwest Florida Marine Industries Association at its recent annual dinner in Fort Myers. McBride is the Coastal Project Manager for Lee County’s Division of Natural Resources Marine Program and a long-serving Member of SWFMIA’s Board of Directors. 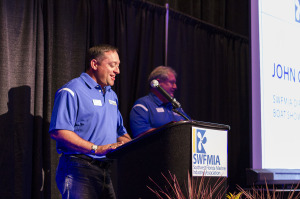 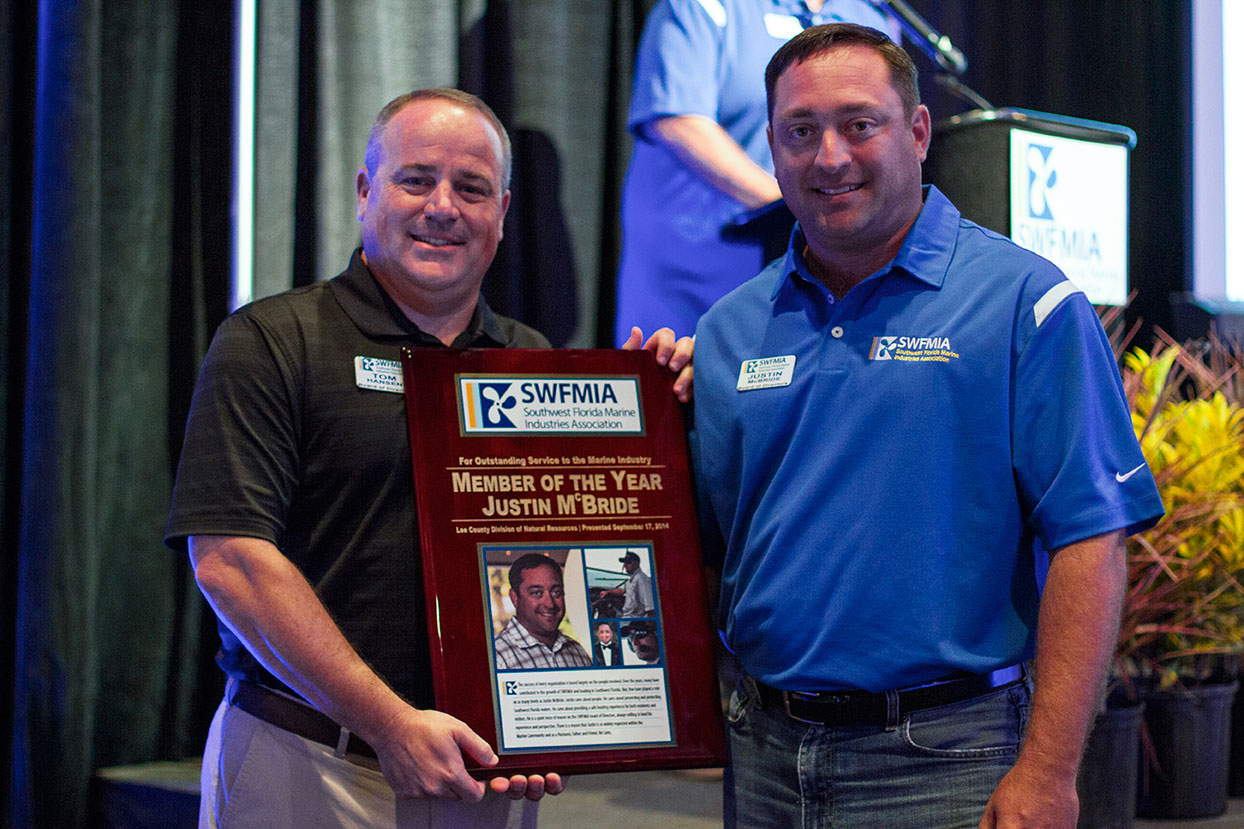 “We are very fortunate to have Justin serving on our board,” SWFMIA President Hans Wilson said. “He brings a valuable perspective as a part of local government and an avid boater.”

Among many accomplishments, McBride is responsible for publishing the popular Lee County Boater’s Guide, a comprehensive guide to boating information for residents and visitors. He also helped create the smart-phone app for the Boater’s Guide. McBride and the staff of Lee County Natural Resources Marine Division handle aids to navigation, abandoned vessels, beach management, artificial reefs and manatee protection.

For more than 40 years, the Southwest Florida Marine Industries Association has represented the interests of the marine industry. For information, contact John Good at john@swfmia.com or (239) 656-7083.